Larned, KS to Dighton KS, to Leoti, KS2 Day Mileage: 96.9 + 49.1 = 146.0Total Mileage: 2,431.4Average MPH Day 38: 14.1Average MPH Day 39: 15.5Elevation Day 38: 1,282 ftElevation Day 39: 538 ft
MSquared Velo Snapchat Day 38
MSquared Velo Snapchat Day 39 (will be posted after some carni fun!)
We woke up to thunderstorm on day 38. Or I should say, a thunderstorm woke us up promptly at 7ish.
It was only passing, so we packed up under our Pavillion while it rolled through and we're ready to go when it finished.
Mike and I agreed this would likely be a big day for us because there was not much in the towns ahead. Rush Center was too close, only 35 miles. We called Elaine's bicycle hostel in Bazine but she said her husband is battling cancer so we are welcome to camp in the back yard, but laundry and showers would be 10 bucks. This was about 60 something miles away and everyone we met last night seemed to be going there. We didn't want to be added stress and preferred to trudge ahead to Dighton, about 100 miles away.

The ride was wonderful! Once we turned north toward Rush Center we got full on tail winds for about 20 miles. Upon reaching Rush Center we stopped for lunch at the local pub and order a 22 oz Bud Light for $2.50 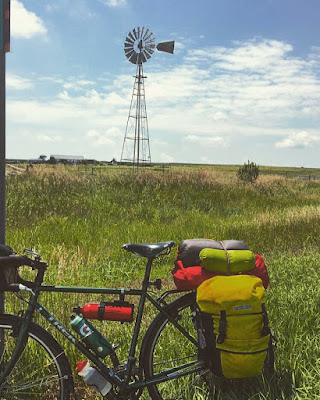 We met a nice man named Terry who was leaving to go steal some sweet corn from his brother-in-law. He offered to find us in Ness City (30 miles further) and drive us to his house 5 miles outside of town. There he said we could have dinner and sweet corn. He also offered up his wife's services to do our laundry. We took his number but still had our eyes set on Dighton, 70 more miles away. 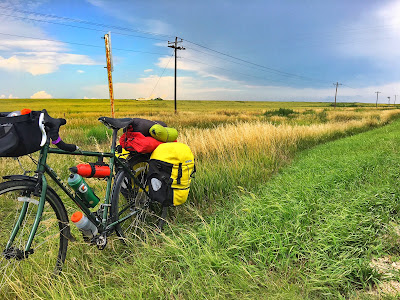 I felt great, Mike felt great... We reached Ness City but had no doubts we wanted to reach Dighton. So off we went.

We were mostly separated today. Mike was slightly behind me enjoying some obscure a capella group and probably also listening to the Comedy Bang Bang podcast and I was listening to my share of podcasts, audible and music. 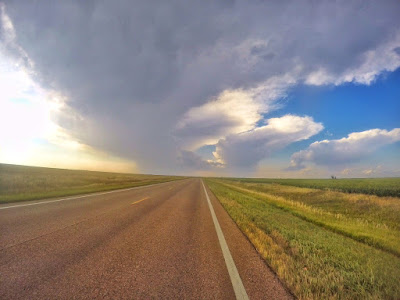 We both got to enjoy watching the giant clouds above and beyond us battle as one shown bright and white with the sun behind while the other struck out with lightening, thunder and rain many miles away.


By far the coolest scene was when the sun reached a certain point in the sky and started to burst through every hole in the clouds. We have all seen sun rays shine down from the sky, but what made this so mesmerizing was seeing rays from all angles of the sky. The rays far off to the right pierced the dark stormy backdrop at a steep angle. Not as far to the right were more rays streaming down at a more forgiving angle and finally, off to the left, were bright rays playing off the light blue sky. Then there was me, with the sun directly in front of me casting no rays, as if providing a natural tunnel vision, inviting me to chase it down highway 96 before it set for another night. 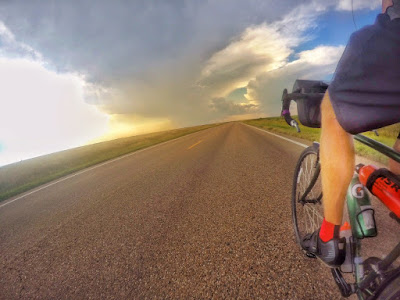 We reached Dighton planning to camp, but met a very nice man from Israel, Yoram, who was staying at the hotel in town for only $50. After 97 miles of riding and more elevation than we have been used to the past few days, Mike and I agreed to split yet another hotel room. 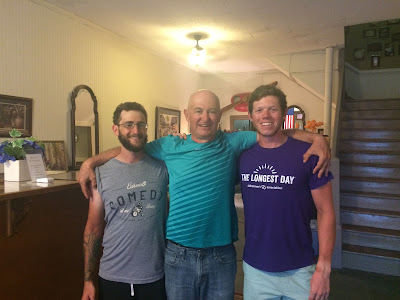 The hotel was a gorgeous 99 year old two story building, the sky scraper of the town. The owner does all the maintenance on his own and his biggest clientele, us cyclist! He meets pretty much everyone who rides the Transam.

I jumped out bed around 2 AM at the sound of the loudest thunder I have ever heard. I thought the whole town collapsed. But there I remain safely in my own bed with Mike in his. I was told about Kansas thunderstorms and there was my first meeting.

Mike and I rolled lazily out of our freezing room around 9:30 and went to the same diner we ate at for dinner and ordered the same breakfast platter from the same lovely waitress, Megan/Meghan/Meighan.

Day 39 will be nice and short. Less than 50 miles to Leoti where our warm showers host is not in town but has left her door open for any and all cyclist to come and go as they please. The only condition is to leave the place cleaner than you found it. We can do that.

We received massive tailwinds today and average over 15 MPH. It would have been a good day to go further, but we had a place to stay and have the next few days planned out with places to stay as well so we're sticking to that.

I was light on Snapchat and taking pictures today because Kansas is now becoming redundant. Still beautiful, but just the same. We will be in Colorado tomorrow and in Pueblo in 3 days. Apparently Colorado doesn't look like Colorado until after Pueblo, so until than it's more Kansas.

David (who we met yesterday) was told there is a fair in Leoti tonight and that it is a, "genuine Kansas experience," with fried everything, a rodeo and $0.25 rides! Stay tuned on snapchat for some good Kansas fun. I need to run to the ATM!