As you may have noticed, a slight change to my statistics up there. I swapped out total ride time for average MPH and the day's elevation. I figure it's more interesting.

I woke up to the smell of eggs one the stove and fresh pot of coffee. Mike uncharactistcally is up first! And putting in work at that. He makes a mean scrambled egg. The coffee was great too, I had three cups. The leftovers went into a spare water bottle (Ryan's move) for emergency pick me ups.

We rode over to Wal-Mart to stock up on our usual: a few Mios, a 2 foot sandwich and a 6 pack of cliff bars. Then we were off to Larned. Is it said like larnd or lar-ned? Not sure even the locals knew.
On today's ride it goes without saying, the sunflowers were my favorite part. The contrast of their own yellow pedals to their green leafs to the blue sky made for a breathtaking moment as we rode past for quarter of a mile. Also I finally finished my giant pack of sun flower seeds that I brought on day one. I have been snapping them open all trip, it's nice to finally see their result. 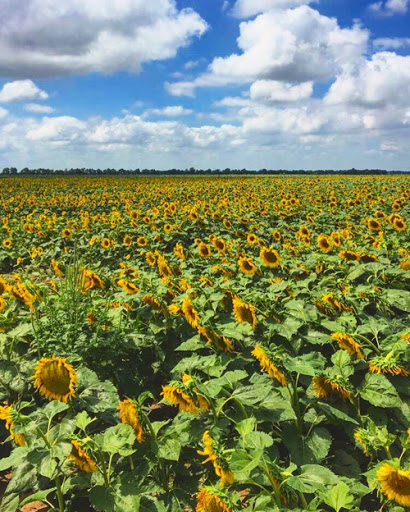 I was feeling very good this morning so I was cruising on ahead of Mike. We typically stop around Mike 30-40 for lunch which was approaching so I started to turn around to look for Mike. He was too far behind and you can't see very tiny things that are far away in your review mirror so I would turn my neck and swerve my bike to get a better look behind me. This is not a problem since we essentailly have two full lanes to work with, but I got lazy.

I swerved too far left, both wheels fell off the 2 inch edge of the road and I tried to correct myself quickly. My front wheel got back up on the road but my rear wheel dragged and spun out underneath me essentially causing me to do a feet first baseball slide with a bike between my legs.

My feet naturally unclipped from the pedals and I was standing before I even thought to. Luckily I was not going fast because I was slowing down for Mike anyway, so I escaped with almost no injury but a scratch on my ankle the size of a dime. My handlebar also bent in a little, but that just took a little muscle to straighten it back out. Jasper fared a little worse with bigger scratches and torn handlebar tape, but still 100% functional like me! 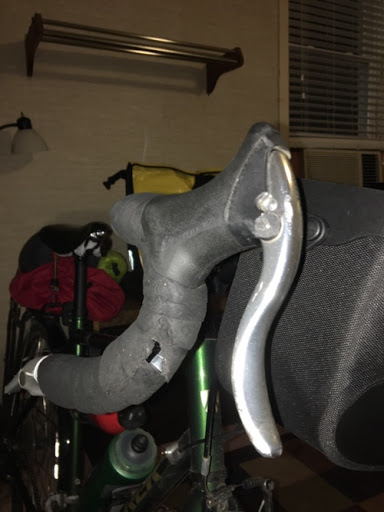 After sliding safe into third, I had some adrenalin going but settled down after a mile and we took our lunch break at a county line.    The one thing we did not remember to grab at Wal-mart was extra water. As Kansas continues to be beautiful, it's a double edge sword as there is nowhere to "refuel" for miles and not even any shade to enjoy lunch in. 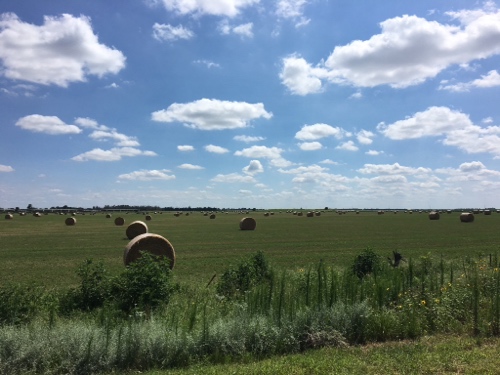 At the county line we spotted a house with a beautiful tree in the front yard. As things seem to go on this trip, our timing was impeccable. The owner was just pulling out, so we asked if we could eat under his tree. He told us to go up on his porch where there were chairs and a table. 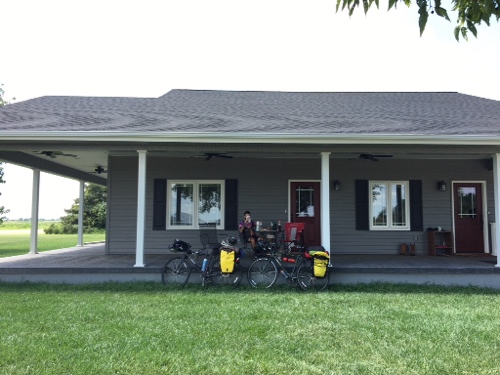 Only minutes later did he turn back into the driveway to bring us inside for re-up on ice and water! No surprise there, people are amazing.

The rest of the ride was easy and flat to Larned. Mike and I met a cool father son duo at Subway (oh yeah that's another best friend). The son, David, moved to Brooklyn less than 2 years ago and started the NYC Adventure Cycling Club because there was nothing else like it around. Starting their first trip with only 12 guys, they now have over 500 members. Half of those members are female, which is awesome. He said they do more drinking than riding sometimes, but to me, that is all the better. It will be fun to check that out once I am home.

We made our way down to the Pavillion by the town pool. We were even able to jump in the pool 5 minutes before it closed. It was nice and cool and we launched some flips off the diving board. Maybe we made it nice and cool.... HA!

We met 4 more cyclist down at the pavilion. Two were a couple from Canada (originally Bulgaria). A lovely couple enjoying Keystone Light tall boys. The other two coming all the way from the Florida Keys! It is always cool to hear where people are coming from and how long they have been on the road.


Mike and I ended up leaving that Pavillion because it was next to a pond and ducks which results in bugs. Turns out bugs are everywhere! We held out setting up tents and opted for sleeping on the park benches in our sleeping bags as we usually do. Finally at midnight we both were on the verge of sleep, but my hand got bitten on my pinky, middle finger, pointer finger and knuckle and I think the same for Mike.

We ended up setting up our tents and fell asleep almost immediately. That is after the high schoolers left the park to chase a Pokemon down the street.
Posted by Unknown at 1:44:00 PM