I woke up promptly at 6 AM in the windowless room at the Jeffrey City church. It was a very familiar feeling of waking up in my first apartment in New York City, which also had no windows.

I made my way right to the kitchen and flipped the switch on the coffee maker that I prepped the night before. I could see the orange glow from the windows so I skipped outside for a view of the sunrise. 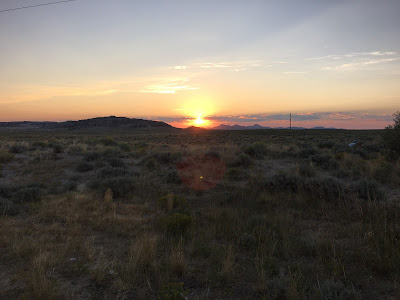 I took a deep breath in and cheers-ed the breakfast colored sun with my cup of joe. Another great day to be alive.

Colin did as he said, and was out around 6:30. I did not even see him exit as I made breakfast and packed up the rest of my gear. David and Marion slowly started to rise as well.

I made it out promptly at 7 because I wanted to get to the bike shop in Lander as well as visit the library. Some things just can't be accomplished on the phone or iPad. Too bad it is Sunday and the library was not open.

It was a tough day for a few reasons. Breakfast was weak... except for the full cup of coffee. This is the reason for the early excitement on Snapchat... but that quickly faded. On top of a poor breakfast (a cup of oatmeal and Nutella on a wrap), I did not have lunch or even a lot of snacks on me for that matter and there was no services until Lander. Lastly, I was riding solo.

Riding solo is okay knowing you have someone ahead and behind, but this stretch of Wyoming was considerably boring.


I was looking forward to a big downhill that Colin said we would see today and when it finally came, I was pumped. 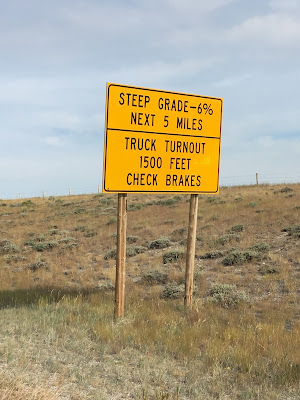 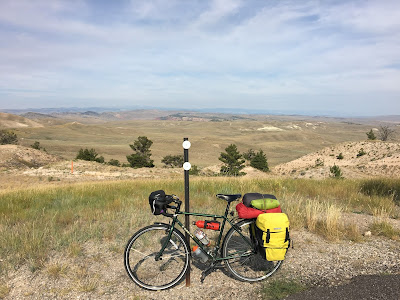 It was fun to roll down hill of course and it gave me an extra boost of energy.

I checked my map to see if I should dig into another Cliff Bar or hold out for town. I had a crazy craving for McDonald's fries that I could not ignore. It looks like I only have 6-7 miles left so I can hold out. Only 30 minutes.

A few miles later, I checked the map and realized I was looking at the wrong town. I actually had 16 more miles. Completely demoralizing. Mentally more than physically. I was bonked. I swallowed a Cliff Bar whole and kept chugging. 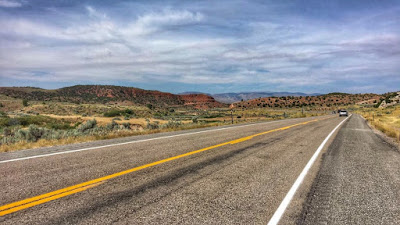 With a two miles left I saw a sign for a motel, "Lander Motel 1.5 miles, take the right after the McDonalds."

NO WAY THERE IS A MCDONALDS HERE!!!!! FRENCH FRIES AND GREASY BURGER HERE I COME. YAAAAAAAAAAASSSS!!

I swear there are angels throwing goodness my way constantly on this trip. Even a small thing like a McDonalds.

I got my classic high school order. A large number four, no pickles. That is a double quarter pounder. Oh and an Oreo McFlurry... then I went back for a four piece nugget. All eaten in under 10 minutes.

Finally I made my way to the bike shop. I don't want to get into how REI screwed up the new tire they put on in Denver, but the guys at this shop fixed me up. They even gave me (and any other Transam rider) a free ice cream sandwich... I chose cookies n' cream.


I bought two new tubes for myself, one for David I had to replace, a new frame pump and more Cliff Bars. I seriously need a sponsorship from Cliff Bar. If it is now day 57, I have probably had 65 Cliff Bars. Not included the ones Amber's dog ate.

After the bike shop, David met a local musician, Garrett Lebeau (he is on Spotify). He just finished a tour and is back in his home town, Lander, to preform for his friends and family. We were excited for beers and live music! 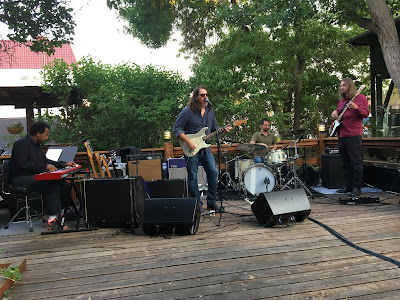 Marion stayed guard at the campsite while David, Colin and I went to the bar and talked it up with the locals and enjoyed the locally brewed beer. It was delicious, we had a few pitchers... 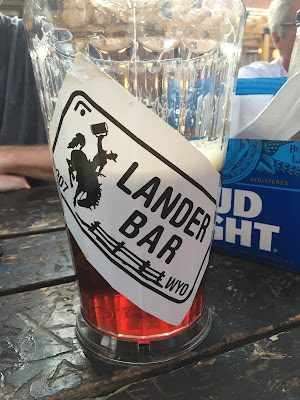 With a good buzz, I settled into my tent and fell into a deep slumber.

Again Colin was gone by 6 AM sharp. David woke me up as he began to unpack. His dad was well ahead of us both and left by 7 with hopes to beat threatening wind. This did not end up being to big of a problem.

David and I grabbed a few high calorie items from the front desk for 50 cents each and made our way out of Lander. We agreed this was one of, if not, our favorite town of the trip. It was small, but still had life (see day 56 Snapchat). It's not in decline and dumpy like most of the towns we ride through.

We also agreed that the Transam should be updated so cyclist can experience the culture of different towns and states through the people. Not riding onto I-80 for 12 miles to end up hiding in a crappy motel room in shoddy Rawlins, WY. 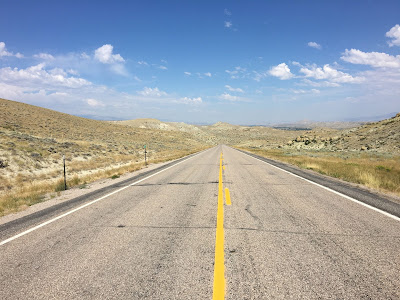 For now, David and I ride on until stopping in a grocery store in an Indian Reservation so I could grab SNACKS!

It is pretty cool to see everyone that walked in really is of Native American descendant. The bulletin was even full of flyers for Pow Wow's and such. It is sad to see this is all "we" left for them...

Anyway, off we went and SPLANG!

David broke a spoke in his front tire. I have been there thrice and told him he should be good, but his front wheel was really out of true. There is no bike shop in the near future so he made the decision to hitch a ride back to Lander. We were only 15 miles out.

I rode on, now alone again, but with hopes of catching Marion. 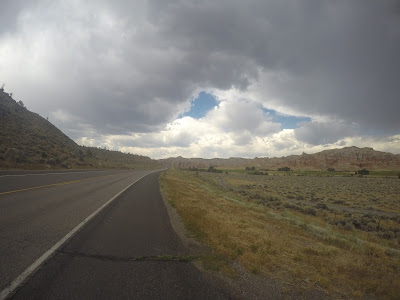 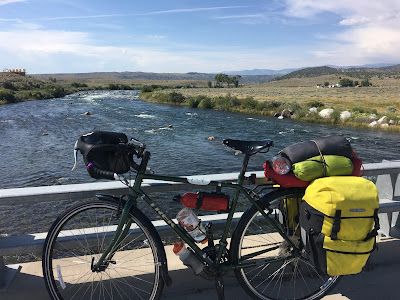 Eventually I did catch Marion and Colin at a gas station in Crowheart.

We met a nice 18 year old girl who lives in Crowheart and has no intentions of moving. Her family owns a huge farm right across the street and she told us how she spent yesterday herding the cows up into the trees of the mountains. She also produced the strongest handshake I have received on this entire trip. That's a cowgirl for ya!

Marion took off before stiffness overtook him and I waited for Colin to finish up so I could ride with and get to know him more. 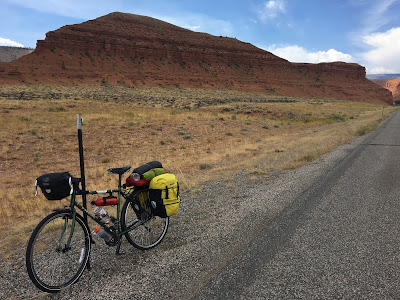 Girls are a very popular topic. Probably because it is the one thing that is scarce on this trip.

Colin actually rode with a girl from Wichita to Pueblo(?) that he met on Warm Showers and developed quite the bond with her. I can only imagine. Relationships progress quicker than usual as you have read throughout my travels.

As we spoke, the shoulder started to thin and I thought I had room in front of Colin to move ahead of him. I was wrong and I did not communicate my intentions. I clipped his front wheel and our panniers stuck together like they were coated with glue and Colin went down. He was lucky to not hurt himself or his bike.

After a quick inspection of his cuts, we were back on our wheels and the scenery really started to unveil itself. 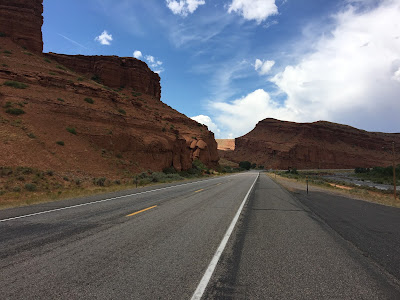 With the final 10 miles approaching... we of course hit those headwinds. We barreled down and turned a corner and BOOM.... ah the views. 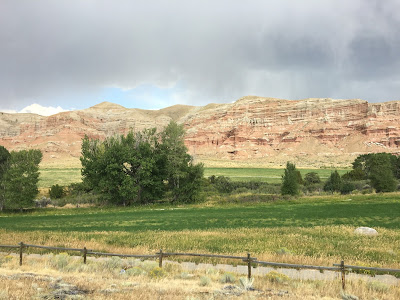 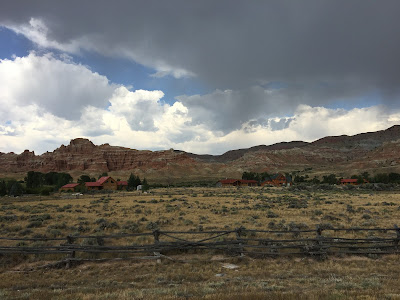 It is so incredible to see the lines in the rock formations. Millions upon millions of years formed what we see today. Talk about history... Oh... I wasn't talking about history, but you get it. 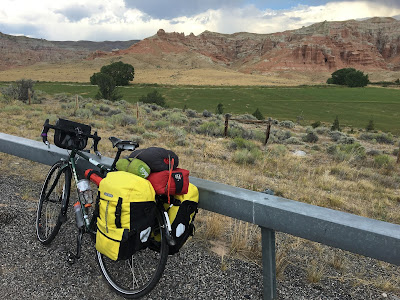 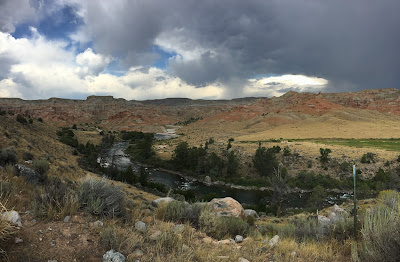 The locals (and Wikipedia) pronounce it Dew-boyz, not Dew-bwah. So in honor of the latest frenzy, MONDAY IS FOR DEW BOYS! (or TOFDB, I'll let you figure that one out).

Tonight we stay in St. Thomas Episcopal Church. The churches are honestly the best. Warm Showers is great because you are guaranteed a shower, usually a bed and sometimes dinner, but at churches it is just you and whoever else is cycling so you can relax a little more and sprawl out.

David will be here soon and we will probably all go out for a cheap local dinner.
Posted by Unknown at 4:22:00 PM