Did I mention I am officially on the Transamerica Trail? As soon as I exited Shenandoah Park, there it was. 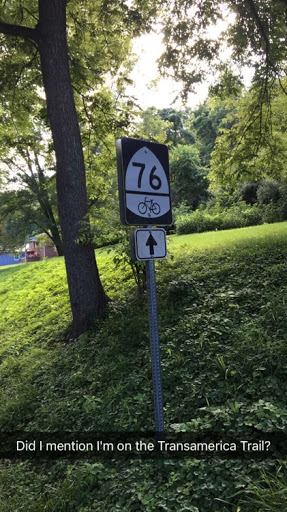 I had high hopes for a big day leaving the Cookie Lady's house. I thought it was one big climb right outside of June's house, the same hill I rode down from the mouth of Shenandoah, but boy was I wrong. For the next 30 miles I made my way up and up to 3300 feet on the Blue Ridge State Parkway in the Appalachian Mountains. I honestly thought it would never end. 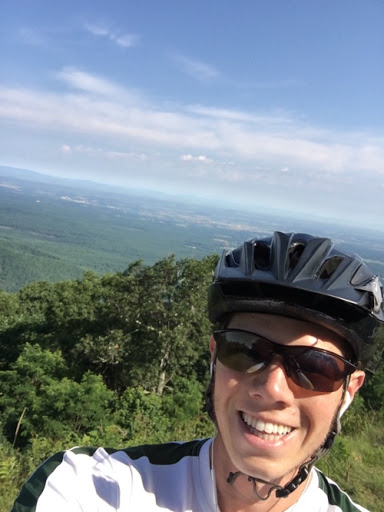 BUT FINALLY, my directions took me off Blue Ridge and I began an epic decent from 3200 feet to 1000 in a matter of minutes. All I wanted was all downhill to Richmond, but it's never that easy.

Once I finally got to Richmond, I stopped for a late lunch at the Palm. As I was finishing my giant burger, fries and third Pilsner, a very enthusiastic cyclist came right up to me at my bar seat.

"Can I get you something?" Asked the waiter

"No I am here for him." The cyclist said without a moment of pause between the question and his answer.

The cyclist didn't even say hello before asking to see my map so he could give me a shortcut out of town. Obviously he saw Jasper loaded and locked outside, then spotted my helmet next to me at the bar and made his approach.

After showing me his shortcut which potentially saved 10 minutes and a lot of extra energy on hills, he continued quickly into examining my "kit" and praised me for having cycling shoes. He was aghast at the people who roll through Richmond on their cross country trip who have, "all this high tech equipment, but neglect to buy proper cycling shoes." As he explained, and the reason I got shoes in the first place is because of their stiff soles. The stiffness transfers all that downward force from your heel to your toes and into the pedal. Other wise half the force created by your legs is lost in the flex of a normal shoe's soul. As he put it, "By the time you get across country you could have been halfway back."

On that note, he started to make his way out of the bar. I felt like I never got a word in! He just kept reeling off information and praising me about my cycling shoes. Before he left I introduced myself and took a selfie. 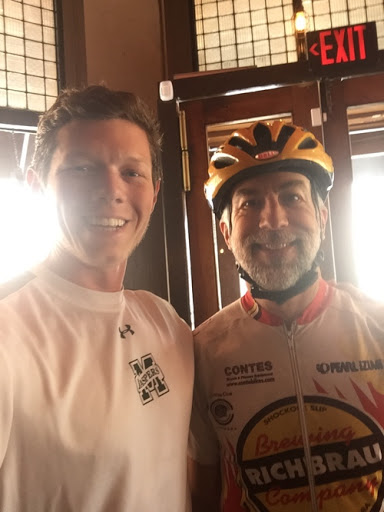 Of course... I forget his name as soon as he said it because he went right into more dialogue. He told me he rode the Transam in 1976 when it was first created, then known as the Bikecentennial. I mentioned I stayed at the Cookie Lady's house last night and he told me of his lovely experience meeting June. At this point he was halfway out the door while we were mid convo.

I followed him out the door as he inspected Jasper. I received more praises on Jasper and everything she held. He explained he used to work at a bike shop and wanted to fix my handlebar tape (it is sliding apart). Unfortunately he didn't have the patience to fix it. I'm starting to think he really had to pee. 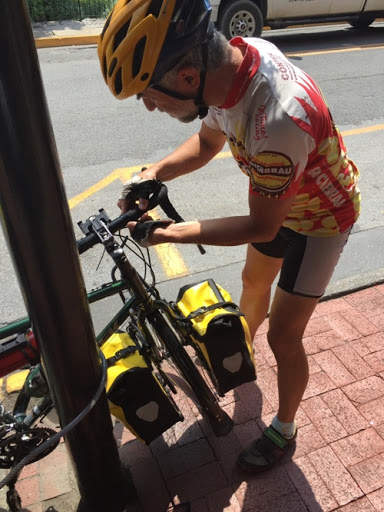 I went back inside to pay my check and finish my beer. When I came back out to walk Jasper over to the park to lay down for a minute (3 beers really got to my head. I love how low my tolerance is now) he was back! He offered to ride me out of town but unfortunately I didn't want to ride my 80 pound bike as buzzed as I was. He handed me a chocolate from the chocolatier up the street, that of course he works at on Saturday's and was off! They make the chocolate every morning in house and it was delicious. 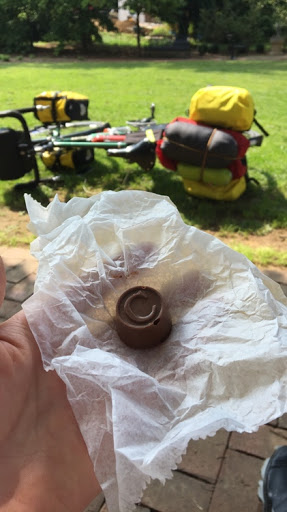 It was a great experience meeting such an enthusiastic cyclist. It reminded of the enthusiam Al Bundy had on day 2.

I was off again to leave Richmond and find my first "stealth camping" spot. As I rode, nowhere felt right. I checked my map and saw a little town called Buchanan, VA. Only 12 miles further. I was drained but was confident this would be the place. Only 8 miles later I saw a sign for a carnival in Buchanan from June 30th to July 5th. I thought that'd be cool, but then forgot about it right after; too exhausted to hold a thought.

I rolled into Buchanan checking out the churches and volunteer fire house for a spot to sleep, then to my right, there it was. A Ferris wheel and the sounds of a banjo! 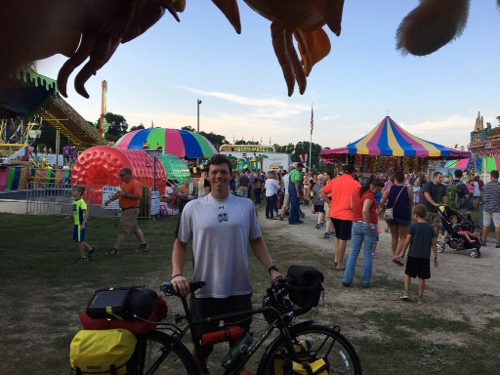 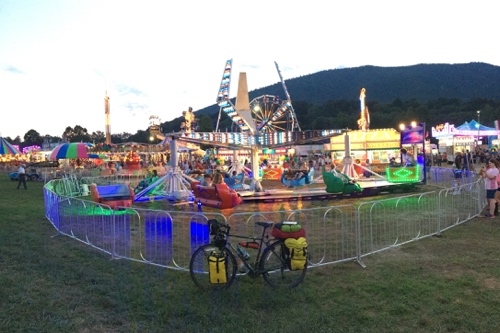 The first person I saw was a police officer. I wanted to ease my mind so I asked him where I could camp out. He pointed to the entire carnival and said, "Anywhere here is good. It will be a little loud, but nobody will bother you." That sounded good to me, now it was time to enjoy the carnival.

I grabbed a $5 slice of pizza and checked out the live band. While not my type of music, I can appreciate the amazing banjo and mandolin player. Then I stepped up for some 25 cent bingo with the locals and knocked over a clowns face with a baseball (I did not accept the neon pink giraffe). It was the perfect ending to a long night.

When I finally hit a wall around 9ish, I rolled Jasper around the corner and found a little spot away from the carnival and where nobody could even see me. I was asleep instantly.
Posted by Unknown at 11:33:00 AM